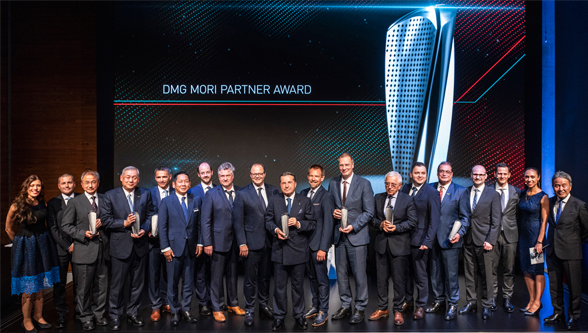 “Suppliers and partners of DMG MORI are characterized by high quality, reliability and innovation.As strategic partners, they are an important member of the global DMG MORI network,” says Dr. Eng. Masahiko Mori.

In the field of automation, the WH-Flex is a modular automation concept for workpiece and pallet handling for up to nine machine tools. Another highlight will be the new driverless transport systems, so-called “Automated Guided Vehicles” – AGVs, a joint innovation with development partner Jungheinrich.

In the field of digitization, DMG MORI presents more than 30 innovations, including CELOS APPs for comprehensive DMG MORI monitoring and efficient production planning and control. From EMO on, “my DMG MORI”, the new customer portal for service optimization, will also be available.

Customers gain fast direct contact with service experts, status monitoring of their service and spare parts enquiries in real time and access to all important documents. In the future field of ADDITIVE MANUFACTURING, DMG MORI covers the entire process chain – from the material cycle through simulation to service and consulting.