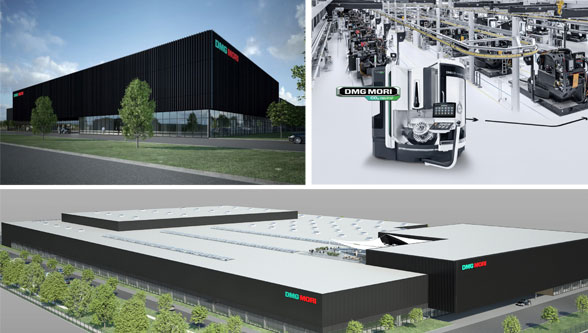 In China – for China: DMG MORI invests around € 75 million in a 35,000 m², highly automated and consistently digitized production plant for 5-axis milling machines in Pinghu. The new site near Shanghai covers a total area of 70,000 m².

Bielefeld // Today starts the CIMT in Beijing – the most important industry trade fair in Asia. The ideal place and time to announce expansion plans in this world’s largest market for machine tools: Already this year, DMG MORI plans to start construction of a 35,000 m2, highly automated and consistently digitized production plant for 5-axis milling machines in Pinghu near Shanghai.

“We are building the world’s most modern production plant in Pinghu for € 75 million and are showing the full potential of our holistic technology solutions: flexible automation, end-to-end digitization, cutting-edge flow assembly with AGVs for 5-axis milling machines”, says Christian Thönes, Chairman of the Executive Board of DMG MORI AKTIENGESELLSCHAFT.

“Made in China – for China”: with this goal and a high level of value added depth, DMG MORI produces 5-axis milling machines of the DMU series. The state-of-the-art production is aligned to an annual capacity of over 2,200 machines. The new site covers a total area of 70,000 m². The Grand Opening of DMG MORI Pinghu Manufacturing Solutions is scheduled for the end of 2022. Pinghu is located in the middle of the Yangtze River Delta – one of the most dynamic economic zones in China – and has developed rapidly in terms of economy and technology due to its geographical advantages.

Just in September 2020, DMG MORI put into operation the new monoBLOCK Excellence Factory in Pfronten with 36 AGV transport systems (“Automated Guided Vehicles”). The value chain powered by the “no-code” platform TULIP, which is developed and completely digitized by the company’s own employees, will now also be used in China.

The high demand for machine tools in this fast-growing market is currently serviced by more than 500 employees. In addition to the technology center in Shanghai and production plant in Tianjin, there are eight sales and service companies (Beijing, Shenyang, Chongqing, Xi’an, Shanghai, Ningbo, Suzhou, Shenzhen). The new investment of around € 75 million underlines DMG MORI’s growth plans in China.

Manufacturing sector is on the verge of a technology revolution

Contributing to the growth of the wind power industry