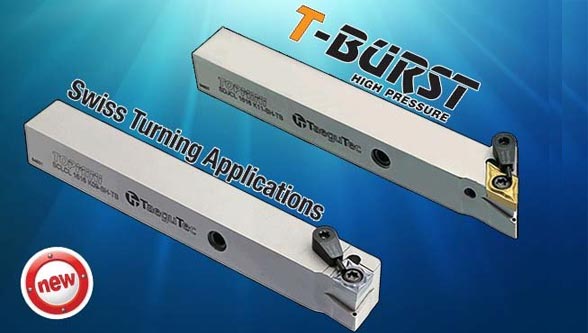 The T-Burst holder for Swiss turning applications, as with the current T-Burst holder, applies high pressure coolant from dual holes directly between the metal chip and the insert’s rake face; a feature that optimizes control, extends tool life as well as increases productivity through higher cutting speeds and feed rates.

It is capable of handling coolant pressure up to 140 bar maximum and is designed to machine miniature products generally found in the automotive, medical and aerospace sectors. The new T-Burst holder is ideally suited for machining difficult-to-cut materials such as stainless steel, titanium, Inconel and other heat resistant alloys.
For added convenience, a simple coupling (one-touch exchange) system has been introduced. The hose connecting the machine to the holder can be easily and quickly attached or detached for replacement.

The coupling system’s hoses are available in two lengths: 200 millimeter and 300 mm depending on the machine’s specifications.

During product testing, be it on medical parts or parts for the automotive sector, the new T-Burst for Swiss turning applications increased tool life by a minimum of 100 percent over the competition.

In one test on a mission core workpiece made from steel magnetic iron, the new addition to the T-Burst line increased tool life by 300 percent over the competition.

In other tests on different materials such as steel magnetic iron and chrome cobalt molybden steel, the new T-Burst raised the bar by increasing tool life by 100 percent