How KM4X is improving bottomline for job shops 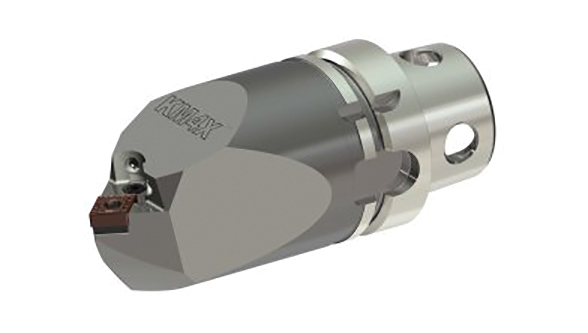 The KM system from Kennametal Corp., Latrobe, PA has been a top performer in the Quick change modular tooling area for over three decades, and is known throughout the industry for its high clamping strength and consistent accuracy in both spindle-mounted and static tooling applications

Quick-change modular tooling is a clear way to increase productivity, shorten setup time, and generally improve the bottom line for job shops and large manufacturers alike.  The bending moment of KM4X is substantially higher than any tooling interface available on the market today, superior even to Kennametal’s own KM design

So when aerospace giant Boeing came to Kennametal with a request for a heavy-duty spindle connection capable of outperforming traditional CAT and BT-style adapters, tooling engineers turned to this robust and well-established platform as a starting point. The result was a 100 mm spindle connection with four ball tracks instead of two and up to 40 percent greater clamping force than comparably-sized KM tooling.

That was 15 years ago. KM continues to thrive, and was adopted in 2008 by the International Organization for Standardization (ISO) as ISO standard 26622. The original Boeing-inspired design has been renamed as well, and marketed for the past several years as KM4X100™, a spindle platform popular with machine builders such as Fives Group, Mitsui Seiki, Stama, and others, as well as those machine shops looking for superior rigidity in demanding machining conditions.

KM4X tooling family gains a new sibling
That popularity is about to grow. Kennametal has announced the KM4X tooling family has gained a 63 mm sibling, one aimed at a broader machine tool platform and therefore greater availability to the machining community.

“Just as we did with Boeing, we challenged ourselves to make a great solution even better,” says Bill Redman, Kennametal Global Product Manager, Tooling Systems. “The clamping strength, bending stiffness, and RPM capabilities of the KM4X63™ are dramatically higher than virtually any other connection out there.”

Redman and others on the product management and engineering team aren’t done. They recently approached a number of machine builders to ask for opinions on the initial KM4X product offering. Based on that feedback, Kennametal continues to expand the portfolio—the KM4X lineup now includes shrink fit toolholders, HydroForce™ hydraulic chucks, TG and ER collet chucks, and a variety of other spindle tooling, clamping units, and modular adapters, with more on the way.

“By the end of 2016, we’re going to add roughly 30 new line items, most of which will be extensions in the 80 to 200 mm range, and centerline turning tools to support mill-turn applications,” says Redman. “We’ve found that, because of KM4X’s extreme rigidity, we can greatly increase gage lengths. This means our customers can reach much farther without having to buy a special tool, something that’s especially important with 5-axis machining—they can basically add on whatever extension length is needed and off they go, in both static or rotating applications. We’re pretty excited about that.” 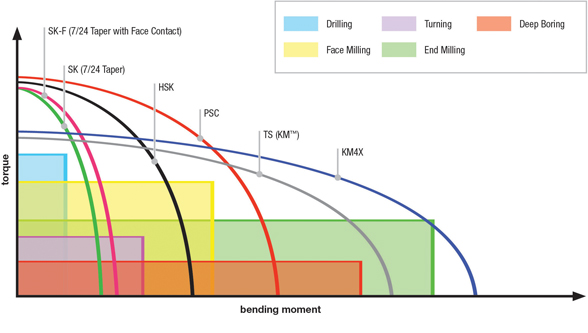 It’s also faster. Redman says KM4X63 comes “out of the box” capable to 38,000 rpm, which is higher than HSK-A and “dramatically” faster than competing brands of spindle tooling.

For those shops on the fence about spindle tooling and quick-change, Redman offers the following advice. “There’s nothing worse than going into a shop that just bought a $500,000 machining center or lathe and then discovers they should have opted for a different tooling platform. We as tooling providers have an obligation to educate customers, and get them thinking about what they’re trying to accomplish—whether they need high spindle speeds for an aluminum or die-mold application, or greater low-end torque for titanium and HRSA machining. The majority of tooling systems out there can accommodate one of these things, but not both. We feel KM4X provides a competitive advantage no matter what you’re cutting.” 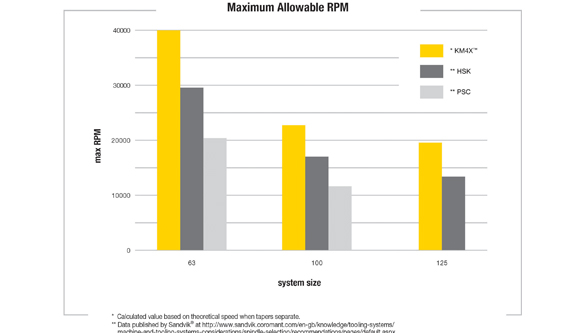