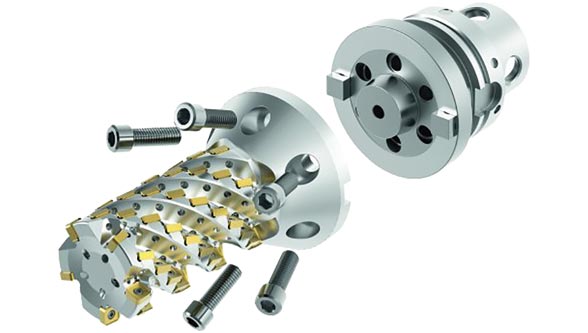 Imagine burying a roughing tool in a block of Ti-6Al-4V titanium and ripping away more than 1000 cm3 (61 cubic inches) of material in just one minute. If you’d been at a recent test of Kennametal’s new HARVITM Ultra 8X helical milling cutter, you’d have seen exactly that. Using a 95 mm (3.74 in.) axial depth of cut, 20 mm (0.78 in.) radially, and a feedrate of 423 mm/min (16.65 ipm), the 80 mm (3.15 in.) diameter HARVI Ultra 8X plowed through this difficult aerospace superalloy for nearly three minutes straight without flinching.

Maximum Excitement
Tim Marshall, senior global product manager for indexable milling, has tested the HARVI Ultra 8X with a variety of customers, pushing the limits of the new cutter on everything from 15-5 PH to cast iron to Aermet 100 (high strength steel) and seeing outstanding results with each.

“Kennametal developed the HARVI Ultra 8X to meet two distinct needs,” Marshall says. “The first came from the aerospace industry, which thanks to the large numbers of aircraft being built today requires the highest metal removal rates possible but still achieving excellent tool life. At the same time, machine tool builders and users alike are asking for tools able to withstand higher cutting speeds but generate lower machining forces, so as to reduce wear and tear on machine components during extreme cutting conditions. The new HARVI Ultra 8X does all that, and a lot more besides.”

Massive piles of chips notwithstanding, your shop almost certainly wants its tools to stay in the cut far longer than three minutes. Marshall agrees, saying the HARVI Ultra 8X was designed to predictably remove 20 cubic inches (328 cm3) of Ti-6Al-4V each minute while attaining 60 minutes of tool life per cutting edge.

What’s in a Name? 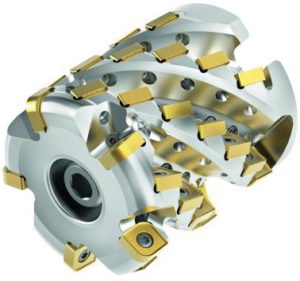 Whether pocketing or profiling, the HARVI Ultra 8X consistently removes up to 20 cubic inches of titanium per minute, with tool life of one hour or more

This last point is particularly important. A variable helix geometry greatly reduces carbide-killing vibration. Using 12 mm and 10 mm inserts also helps, as their smaller size means more inserts in the cutter body, more inserts engaged in the workpiece, and more inserts to absorb the pounding of a heavy machining operation.

Beyond Ti-6Al-4V
“We’ve optimized everything about the HARVI Ultra 8X,” says Marshall. “The flutes and the coolant nozzles assure maximum chip flow, something that’s very important when you’re removing this much material—without it, the chips get jammed up and you’re facing catastrophic failure. Our KCSM40 grade has proven to be a top performer in high-temp alloys, but we also offer several equally excellent grades for other work piece materials. And eight cutting edges per insert? Nobody else has that in a helical cutter.”

Inserts with 8 cutting edges in a helical milling cutter. No one else has that. Insert sizes with IC10 and IC12 mm, 8 different corner radii available.

Double sided inserts not only means lower cost per edge but the ability to increase speeds and feeds beyond what was previously possible, Marshall notes. And because the HARVI Ultra 8X is available with an integral shank or the “crazy strong” BTF46 mount, users can adapt the cutter to virtually any machine tool spindle with no loss of rigidity. “We go up against our competitors’ and sometimes even our own helical cutters and are blown away by the performance improvement,” he says. “For anyone who’s looking for the highest productivity at the lowest possible cost per edge, this is the cutter for them.”