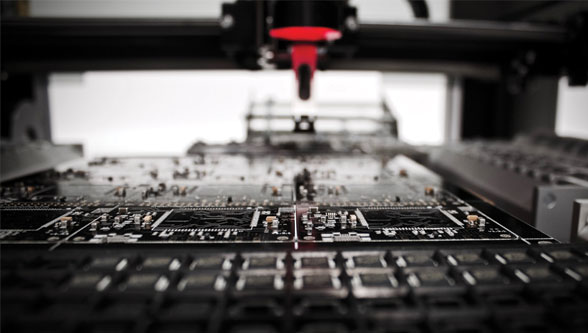 No one would argue against traditional prototyping being a bottleneck in the PCB development and design process. Furthermore, depending on what’s happening with the market, such as materials shortages, that process can end up being delayed quite easily. This can set a project back weeks or even months, snowballing into a major problem, especially when you have customers waiting for new components or products.

Of course, there are a few other reasons for the time delays. For example, manufacturers don’t generally take smaller orders; you must do so in bulk, and if they do honor small projects, they’ll deprioritize, extending the time it takes to complete. Also, those manufacturers may not be local or geographically close, which means the materials and components must ship before and after prototyping, adding to the total project time.

For many, an alternative — and better — solution is to conduct rapid PCB prototyping, often in-house.

How to Leverage Rapid PCB Prototyping?

Modern technology has made it entirely possible to design, craft, and develop printed circuit boards in-house, even using unique and proprietary techniques. How is this possible, especially for a company or team that has no experience with manufacturing?

The answer is 3D printing, or additive manufacturing. The best part is that if you aren’t comfortable doing the work in-house, you can still outsource to a rapid prototyping provider, who will use the same technologies.

When it comes to design, there are many new technologies and methods at your disposal to achieve advanced in-house PCB prototyping systems. Everything remains on-site, but components and builds still meet the specifications and quality that skilled manufacturers would offer. That’s true if you hire a rapid prototyping provider, too.

The machines allow you and your teams to design a prototype and then have it printed within hours or days. You can then take that prototype and make adjustments or leave it as-is to continue the development process — such as moving on to active testing.

There are many types of additive manufacturing methods, from VAT photopolymerization to binder jetting and material extrusion. Each type has strengths and weaknesses and matches a specific purpose. Binder jetting, for example, is cost-effective and versatile, and an excellent solution for working with plastics, ceramics, and metals. It doesn’t require heat, either, as most hobbyist 3D printers do.

It’s important to note that there may be misconceptions surrounding both the rapid prototyping process and additive manufacturing technologies, namely when it comes to quality. Manufacturing is ideally about prioritizing precision, speed, and efficiency, regardless of the product in question. There are several methods — and technologies — which make all of that a possibility, even at incredibly fast speeds. Computer numerical control or CNC prototyping and machining is an excellent example with many benefits, alongside industrial additive manufacturing and a few other methods.

Despite the speed at which they operate, the output is still of high quality with incredible precision. In the case of rapid PCB prototyping, the idea is to create an optimized representation of the final product as quickly as possible so the project can move forward soon after. They tend to be manufactured in smaller quantities with a limitation on material construction. Said limits do not hamper the process but instead allow it to move forward at greater speeds than normal, delivering a turnaround rarely longer than just two to five days.

What Are the Benefits of Rapid PCB Prototyping?

Whether completing the rapid prototyping process in-house with the appropriate equipment or using a fabrication service, there are many benefits compared to conventional channels:

Many of these benefits are exclusive to rapid PCB prototyping and 3D manufacturing. Employing traditional methods will increase the development time of the project and will most likely balloon the costs.

You Don’t Have to Sacrifice Quality for Speed

Thanks to the technologies involved and rapid PCB prototyping services, the entire process can be sped up, more than usual, without sacrificing quality or precision. This opens up many new development opportunities as well due to the increased speed and effectiveness of rapid prototyping.

Time to market is much faster, testing and design are more accurate — with tried and true results to show — and it’s much easier to create and fine-tune proprietary or unique designs. Feedback can also be collected in real-time, shaping the entire design phase for the better and allowing for modifications or alterations before the product design receives final approval.

All of these benefits can be rolled back into the product and its development cycle and then passed on to customers. They get products in their hands much faster, which are made to more exacting quality standards thanks to a precision and testing boost. It’s a win-win, especially when you consider the cost savings, which are another great bonus.

Emily Newton is the Editor-in-Chief of Revolutionized. She has over four years experience covering the industrial sector.

Where should you use Ceramic Inserts in Turning?

Why sustainable engineering is good business