Home LATEST NEWS US manufacturing production to be hikes in November

US manufacturing production to be hikes in November 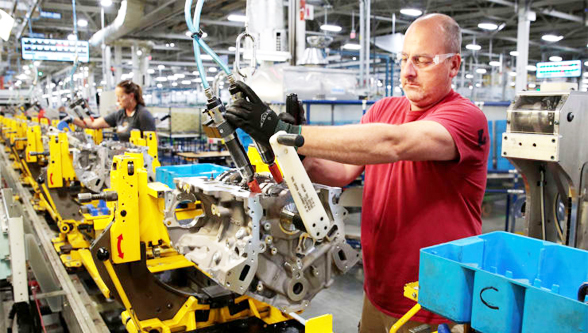 A General Motors assembly worker moves a V6 engine, used in a variety of GM cars, trucks and crossovers, from the final assembly line at the GM Romulus Powertrain plant in Romulus, Michigan, August 21, 2019.

The Federal Reserve said on Tuesday that manufacturing production rose 1.1% last month after a downwardly revised 0.7% fall in October.

Industrial output also rose 1.1% in November after a downwardly revised drop of 0.9% in October.Excluding motor vehicles and parts, overall industrial production and manufacturing output in November rose 0.5% and 0.3% respectively.

Economists polled by Reuters had forecast overall manufacturing output would rise 0.7% and industrial output would increase 0.8% in November. Production at factories still fell 0.8% in November on a year-on-year basis.The United Auto Workers union reached a new four-year labor contract with General Motors in late October, ending a strike by about 46,000 workers with the No. 1 U.S. automaker.

The Fed’s measure of the industrial sector comprises manufacturing, mining, and electric and gas utilities.There was a 12.4% jump in the production of motor vehicles and parts in November. Overall, production rose 2.1% for consumer goods and 1.7% for business equipment, the Fed said. Utilities output increased 2.9% compared to a decline of 2.4% in the previous month.

The manufacturing sector, which makes up about 11% of the U.S. economy, has been weakened by a 17-month trade war between the United States and China.Last Friday, the world’s two largest economies announced a “Phase one” agreement that reduces some U.S. tariffs in exchange for increased Chinese purchases of American farm goods.

With overall industrial output rising, capacity utilization, a measure of how fully firms are using their resources, increased 0.7 percentage point to 77.3% in November from a downwardly revised 76.6% in October.