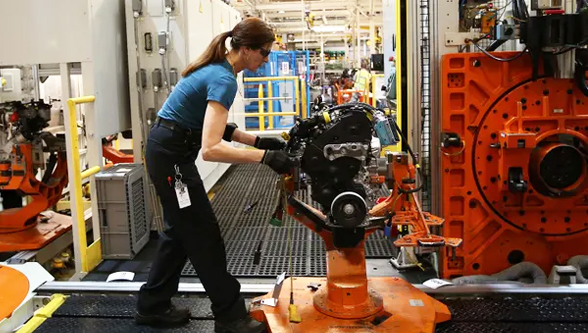 The UK car industry is laying off workers at the fastest rate of all manufacturing sectors.

Manufacturing output in the UK tumbled this month at the fastest rate since the 2008 financial crisis as uncertainty surrounding Britain’s trading relationship with the EU and the outcome of the general election hit domestic and foreign orders.

According to the latest monthly CBI industrial trends survey, the volume of manufacturing production in December dropped at a rate not seen since September 2009, keeping the UK sector deep in recession.

The prospect of looser trading arrangements with the EU and the potential for higher import tariffs following Brexit, which remains a possibility from 2021, was cited by manufacturers for the weakness in domestic order books. Export orders dropped from the previous low point in November as Brexit uncertainty and a global slowdown in manufacturing output took its toll.

The survey of 289 manufacturers found that output expanded in only six out of 17 manufacturing sectors. Aerospace firms enjoyed a boost along with the electronic engineering sector.But the gains were more than offset by steep falls in car production, which has suffered amid the switch to electric cars from increasingly unpopular diesel cars, which dominate the UK’s output.

The survey found that a balance of firms’ responses hit -28% following a slump to -35% in the export order balance.Looking ahead, the CBI said firms anticipated that output volumes would fall at a slower pace in the first quarter of 2020. Firms also expect output prices to pick up slightly in the next three months, boosting their profits.

Howard Archer, the chief economic adviser to the EY Item Club, said the manufacturing industry faced “significant Brexit concerns along with a challenging global environment that may well limit the upside for investment in 2020”.A survey by IHS Markit found that factories laid off workers in November at the fastest rate in seven years. The latest official figures showed manufacturing was down 1.2% year-on-year in October.

Anna Leach, the CBI’s deputy chief economist, said: “With manufacturers reporting that output is declining at a pace not seen since the financial crisis, alongside another month of softer order books, it is crucially important to rebuild business confidence in this sector.

“After three years of gridlock, the prime minister now has a clear mandate to govern. Businesses across the UK will want him to break the cycle of uncertainty. Firms will be looking for reassurance of the new government’s commitment to getting the UK economy fighting fit as it prepares to exit the EU.”

Tom Crotty, group director of the chemicals group INEOS and chair of the CBI’s manufacturing council, said: “These disappointing figures are reflective of the widespread weakness in the global manufacturing sector and the impact of continued Brexit uncertainty in the run-up to the general election.