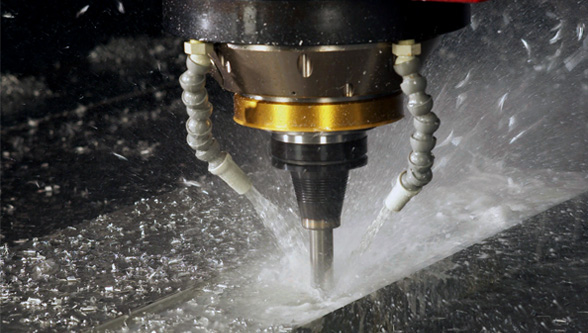 With the growing rate of industrialization, metal working fluids, commonly known as cutting fluids, continue to be extensively used in machining industries even after the development of advanced processing techniques such as MQL and dry machining.

Metal working fluid (MWF) is the name given to a range of oils and other liquids that are used to cool and/or lubricate metal workpieces when they are being machined, ground, milled, etc. MWFs reduce the heat and friction between the cutting tool and the workpiece, and help prevent burning and smoking. Applying MWFs also helps in improving the quality of the workpiece by continuously removing the fines, chips, and swarfs from the tool being used and the surface of the workpiece. Swarfs are the small pieces of metal removed from a workpiece by a cutting tool. With the growing rate of industrialization, metal working fluids, commonly known as cutting fluids, continue to be extensively used in machining industries even after the development of advanced processing techniques such as MQL and dry machining.

The mechanics of metalworking
The mechanics of metalworking which governs the requirements for metalworking fluids includes (i) the bility of the fluid to provide a layer of lubricant to act as a cushion between the workpiece and the tool, in order to reduce friction, (ii) functions as a coolant to reduce the heat produced during machining or forming, (iii) prevent metal pick up on both the tool and workpiece by flushing away the chips as they are produced, (iv) produce the desired finish on an accurate piece-part.
The impetus in the days of the industrial revolution, is to machine or form part at the highest rate of speed with maximum tool life, minimum downtime and the fewest possible part rejects (scrap), all while maintaining accuracy and finish requirements, which can only be achieved by metalworking fluids properties.
In metalworking processes, the use of mineral, synthetic and semi-synthetic cutting fluids have gained widespread acceptance. However, the harmful effects and high risk of life threatening occupational hazards to the machinists as well as causing environmental degradation is discouraging to continue its use in the near future.
As mentioned above, MWFs are primarily used for three reasons –viz; to remove heat during machining operation, to provide lubricating effect and to facilitate faster chip removal from the machined zone. While MWFs enhance the tool life and reduce the cost of machining operation, it is posing a very serious threat to the health and safety of machinists as well as to the environment. As a result, there is tremendous pressure from global energy authorities and environmental protection agencies to develop bio based alternatives or any other alternative to the presently cutting fluids. It has also gained worldwide importance, making green manufacturing–a philosophical process.
The entry and dominance of new, modified, cost effective petroleum and synthetic chemical based cutting fluid has still worsened this condition. A study conducted by the Occupational Safety and Health Administration (OSHA) agency reveals that the detrimental effects of the conventional lubricants, till date, has given rise to sixty three identifiable health hazards such as skin infection, allergy, acute respiratory disorders etc.
Another major problem associated with this, is the disposal of cutting fluids to the environment. The discharge of these non-biodegradable cutting fluids can widely affect the environment due to hazardous metal carry-off, reduction of nutrients in the soil and oxygen depletion.

Research & Development
Research and development efforts are going on throughout the world to find metal-working fluids that eliminate these problems. One proposed solution is to develop a cutting fluid from microalgae oil. Although there are a large number of vegetable oil based cutting fluids available in the market, the sustainability of its production is questionable due to factors such as farm land utilization where food crops are cultivated and soil fertility depletion.

The susceptibility of MWFs to biological contamination and the potential for this to lead to health risks associated with bio-aerosols and infection from hazardous microbial species calls for new technology to detect microbial growth in real-time. The fast response is especially important since microbial outbreaks can occur faster than dip-slides can detect harmful microbial species. In the future, we believe that applications of flow cytometry will offer the opportunity to conduct real-time analysis of microbial species and total biomass load. These challenges have encouraged researchers  for the development of a more sustainable bio based alternative. The use of algae based third generation bio-lubricants allows effective utilization of industrial waste water and sewage sludge material, which is otherwise hazardous to the aquatic fauna when discharged to the surrounding environment.

Minimum quantity lubrication (MQL) techniques represent another growing class of EALs (environmentally adapted lubricatns). MQL typically involves sprays of compressed air and a small amount of oil to provide the function of a MWF without the large volumes of aqueous waste. However, air is an inefficient coolant and today’s oil-in-air MQL systems are only suitable for mild machining operations that do not require significant heat removal. Therefore research is currently focused on developing new approaches that extend the reach of MQL to more intense machining processes.

MQL technologies are relatively new and therefore face technical and economic barriers to implementation. They require new delivery systems dissimilar to those used for aqueous systems. Pilot-scale implementation has shown that MQL systems are less expensive to operate but require significant capital investments in both infrastructure and expertise. Unless environmental and health costs are considered, many companies have considered these costs too high to warrant switching from current systems. Still some manufacturers are making significant investments in MQL due to cost savings and higher performance, as well as for environmental and worker health reasons. Several other large OEM and supplier companies are currently following suit.

The environmental, health, performance, and economic benefits of switching from water-based systems to gas-based MQL systems have been observed in industry. The cost savings mostly arise by eliminating major infrastructure components in the plant, which represent a significant fraction of water-based MWF system costs. This is important since life cycle MWF costs can represent 10-17% of metals manufacturing costs. Delivery of minimum quantities of lubricants using a spray of air (also called near dry machining) reduces purchase and operational costs while dramatically reducing energy consumption at the MWF system level. MQL systems are even claimed to increase safety and operator morale, largely from the elimination of mist and other oily waste associated with flood delivery of water-based MWFs. To date however, MQL has only been adopted on a limited basis because most workers are not familiar with how to design and implement MQL systems. Technical questions also remain about how to achieve sufficient cooling using MQL in challenging machining operations involving advanced materials.

Some form of contaminant control and chemical addition is almost always performed in recirculating MWF systems, driven by costs of MWF acquisition and disposal. In an ideal MWF system, such control systems would achieve a perfect separation of contaminants and return the MWF to its “as new” state. However, contaminant removal on its own cannot address issues such as accumulation of hardness ions, evaporation, pH reduction due to microbial growth, and loss of surfactants. Therefore, even under ideal separation, direct chemical maintenance and biological control is required to extend the life of the MWF.

Microfiltration is a membrane-based separation technology that can not only remove microorganisms, but can also remove contaminant particles and free oil from MWF to produce a high quality recyclate. A major difference between conventional filtration and membrane filtration is that conventional filters operate by capturing particles within a filter matrix, and the filters cannot be regenerated after use. Membrane filtration is typically performed with filtration tangential to the channels of bulk fluid flow. This crossflow mode of operation discourages the accumulation of particles within the filter matrix, and the separation takes place at the surface Membranes can be cleaned and re-used for long periods of time, and essentially indefinitely for ceramic membranes. Therefore, rather than filter clogging with contaminants, the principal limitation to high filtration rates in microfiltration and ultrafiltration is the physical-chemical interaction of MWF ingredients with the membrane surface.

Membrane filtration processes, while challenging, have proven to be able to restore the MWF to “good as new” condition. For instance, research has demonstrated the technical feasibility of using ceramic microfiltration membranes to supplement or replace biocides and other treatment technologies as a means to control MWF contamination and create a recycled MWF indistinguishable from new MWFs.  However the primary limitation to wider application of membrane filtration technology is its sensitivity to MWF formulation design, particularly to the selection of oils and surfactants and their application concentration. While we know how to design semi-synthetic MWFs to greatly increase their flowrates through microfiltration membranes, no commercially available MWFs have yet used this sustainable MWF design approach, even though it leads to more stable microemulsions regardless of whether they are recycled using membranes. This makes membrane filtration as an approach to improve the sustainability of MWF systems less profitable than it should be.