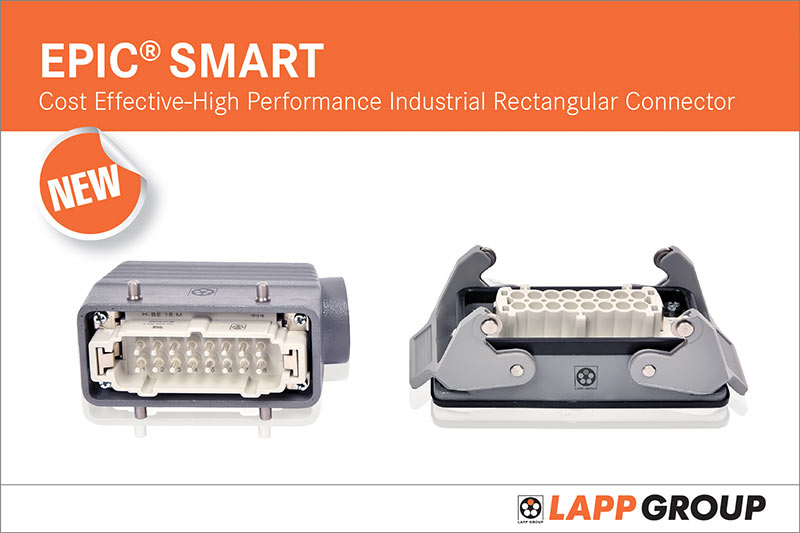 Lapp India, a 100% subsidiary of the Lapp Group Germany and a leading supplier of integrated solutions and branded products in the field of cable and connection technology in India, launched EPIC® SMART, the industrial rectangular connector at IMTEX 2017.

EPIC® SMART Industrial Connector is designed and manufactured in Asia for the Asian customers with the promise of high performance at a cost-effective price. These connectors are used for power and control application in all industries ranging from Machine Tool, Automotive and Material handling to Industrial Automation. They are suitable for rated current up to 16A & Voltage: 500 Volts tested as per DIN IEC 60512-5 & with UL approval.

EPIC® SMART is available in 6, 10, 16 and 24 contacts with screw type termination for easy assembly. These connectors can withstand temperature ranging from -40°C to +125°C making them very robust for industrial applications.

“We are excited to announce the launch of EPIC® SMART Industrial Connectors under EPIC®, our global and well-known brand of industrial connectors. This product has been designed keeping in mind the demands of the developing countries especially India. This is just another move in our efforts to constantly innovate and contribute to meet customer requirements. We have chosen IMTEX 2017 to launch the product as this product is most relevant to the Machine Tool industry”, said Marc Jarrault, Managing Director – Lapp India.

Areas of application include: 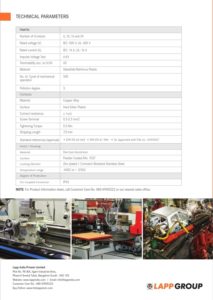 IMTEX is a flagship event for the Indian metal cutting industry. At the exhibition, Lapp India is display its standard product offering in cables, connectors, glands and accessories with a focus on ÖLFLEX® CONNECT, their customized solution offering especially for Machine Tool segment. We are also displaying ÖLFLEX® ROBOT 900 P, ÖLFLEX® ROBOT F1 and ÖLFLEX® CHAIN 808 that have been designed keeping in mind the requirements and challenges faced by the Machine Tool segment with regard to flexibility, compact machine design and harsh environmental conditions during manufacturing.

Lapp India is a 100% subsidiary of the Lapp Group. Having started its operations in 1996, Lapp India provides about 150,000 km per year of power, control, instrumentation and data cables along with connectors, accessories and End-to-End Systems to over 5000 customers pan India. Our customers are spread across different industry segments such as automation, textile, automotive, machine tools, oil and gas, renewable energy, process industries, as well as in the infrastructure and building sectors.

In 2012, Lapp India completed phase one of its second manufacturing plant in Pilukedi, Bhopal which produces more than 216,000 kms of single core cables per annum, catering mainly to the Building Cable Segment. The production area at Jigani was also doubled in 2014 and a new multi core line was commissioned in Bhopal with a total investment of over 5 Million Euros.

Lapp brands – ÖLFLEX®, UNITRONIC®, ETHERLINE®, HITRONIC®, EPIC®, SKINTOP®, SILVYN®, FLEXIMARK® – are some of the best-known in the cable technology field and have earned an outstanding reputation as premium products. All over the world, they stand for the values which Lapp and their customers consider paramount: quality, precision and reliability.

About the Lapp Group

Headquartered in Stuttgart, Germany, the Lapp Group is a leading supplier of integrated solutions and branded products in the field of cable and connection technology. The Group’s portfolio includes standard and highly flexible cables, industrial connectors and screw technology, customized system solutions, automation technology and robotics solutions for the intelligent factory of the future, as well as technical accessories. The Lapp Group’s core market is in the industrial machinery and plant engineering sector. Other key markets are in the food industry as well as the energy and the mobility sector.

The Lapp Group has remained in continuous family ownership since it was founded in 1957. In the 2013/14 business year, it generated consolidated revenue of 820 million euros. Lapp currently employs approximately 3,200 people across the world, has 18 production sites and over 40 sales companies. It also works in cooperation with around 100 foreign representatives.