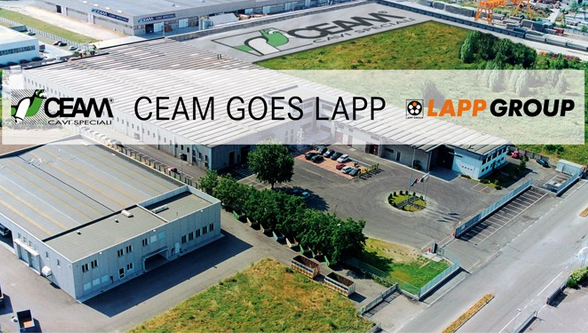 The Stuttgart-based Lapp Group, the leading supplier of integrated solutions and branded cable and connection technology products, has acquired CEAM CaviSpeciali. The company hires 110 employees in Monselice, Italy, and is one of the leading European manufacturers of data cables for Industrial Ethernet and fieldbus network systems. Lapp has also acquired S.C. Fender Cables, a company employing 20 members of staff in Cluj-Napoca, Romania. It specialises in cables for alarm and fire protection systems and, along with CEAM, was part of COFIMA Holding.

“The acquisition of CEAM strengthens Lapp’s leading role in industry-standard data communication systems,” said Andreas Lapp, Chairman of the Board of Lapp Holding. “Lapp has thus attained additional expertise and manufacturing capacities, especially in the fast growing Industrial Ethernet and fieldbus systems markets.” The acquisition took effect on October 13; the parties agreed not to disclose the purchase price.

Long-standing partnership
Lapp has acquired CEAM, an innovative and profitable family company. Its turnover in 2015 was €23 million; Fender generated around €3.5 million in revenue in this year. CEAM and Fender were formerly part of COFIMA Holding, a business run by founders Franco and Carlo Magon. Lapp has a long-standing partnership with CEAM.

Georg Stawowy, Chief Technical Officer at Lapp Holding AG, said: “The takeover will help us to boost our successful branded products – UNITRONIC® and ETHERLINE®. This will help Lapp to become the innovation leader in cable-based data communication systems in the field of automation.” Franco Magon, one of CEAM and Fender founders, emphasized that the Lapp Group and CEAM fit together well not only in terms of technology and products but also in their values: “Ethics, innovation, performance and service – these values have been guidelines for CEAM, and they have brought our small family business together with the global player Lapp.” And Carlo Magonadds:” This acquisition is very good news for CEAM, for our employees and for our customers, as is creates entirely new opportunities for growth and development.” CEAM will continue to supply CEAM products to their existing customers.

Competence centre in Monselice
Lapp will continue to run and support the production sites. The Lapp Group wants Monselice to be its competence centre for industry-standard data transfer technology with a research and development team and a test centre. One of the group’s plans is to develop solutions for fast and flexible data transmission for Industry 4.0 here. The acquisition of CEAM strengthens Lapp’s leading role in industry-standard data communication systems

About Lapp India
Lapp India is a 100% subsidiary of the Lapp Group. Having started its operations in 1996, Lapp India provides about 150,000 km per year of power, control, instrumentation and data cables along with connectors, accessories and EndtoEnd Systems to over 5000 customers pan India. Our customers are spread across different industry segments such as automation, textile, automotive, machine tools, oil and gas, renewable energy, process industries, as well as in the infrastructure and building sectors.

In 2012, Lapp India completed phase one of its second manufacturing plant in Pilukedi, Bhopal which produces more than 216,000 kms of single core cables per annum, catering mainly to the Building Cable Segment. The production area at Jigani was also doubled in 2014 and a new multi core line was commissioned in Bhopal with a total investment of over 5 Million Euros.

Lapp brands – ÖLFLEX®, UNITRONIC®, ETHERLINE®, HITRONIC®, EPIC®, SKINTOP®, SILVYN®, FLEXIMARK® – are some of the best-known in the cable technology field and have earned an outstanding reputation as premium products. All over the world, they stand for the values which Lapp and their customers consider paramount: quality, precision and reliability.

About the Lapp Group:
Headquartered in Stuttgart, Germany, the Lapp Group is a leading supplier of integrated solutions and branded products in the field of cable and connection technology. The Group’s portfolio includes standard and highly flexible cables, industrial connectors and screw technology, customized system solutions, automation technology and robotics solutions for the intelligent factory of the future, as well as technical accessories. The Lapp Group’s core market is in the industrial machinery and plant engineering sector. Other key markets are in the food industry as well as the energy and the mobility sector.

The Lapp Group has remained in continuous family ownership since it was founded in 1957. In the 2013/14 business year, it generated consolidated revenue of 820 million euros. Lapp currently employs approximately 3,200 people across the world, has 18 production sites and over 40 sales companies. It also works in cooperation with around 100 foreign representatives.