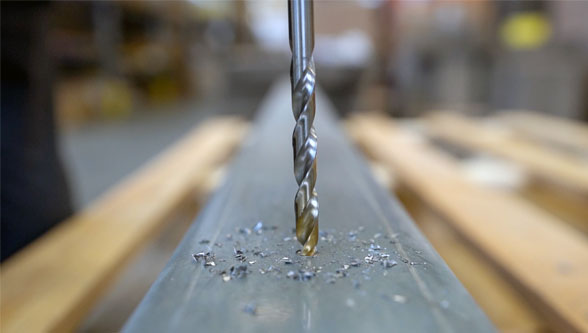 When a new jobber drill was launched at the turn of the millennium, many people did not realize the impact it would have on the metalworking industry.

Now, 20 years later, the Dormer A002 has become one of the most iconic drills in the market, with millions sold around the world every year, but more importantly, it helped keep High-Speed Steel (HSS) the go-to option for machine shops around the world.

At the time the A002 was introduced, the standard HSS twist drill had barely changed in more than a century, with many predicting this was as far as it could be developed. The growing move towards solid carbide, cast a doubt over the future of HSS.

However, the technical engineers at Dormer Pramet (then known as Dormer Tools), felt there was room for improvements to the well-known DIN338 RN style drill, one of the most popular produced at the time.

The company had launched the A001 a few years previously. This HSS split point jobber drill had a duel steam temper to differentiate it from other drills. It was blue in color, with bronze lands and featured a silver ring to denote drill diameter, even when in the spindle.

However, while it had the same geometry as its predecessor, the A002 was a significant leap forward.

These features allow the A002 to drill up to 4xD in steel, stainless steel, cast iron, plastics and many other materials, making it a worldwide hit for its flexibility and ease of use. Its popularity has seen tens of millions sold in more than 50 countries

From cordless drills to five-axis machining, this Dormer Pramet invention has changed the way people perceive HSS drills, helping to keep this assortment of cutting tools the most popular in the market, despite increasing competition from solid carbide.

Sharad Kulkarni, sales manager at Dormer Pramet India, said: “It’s fair to say the A002 has played a significant role in keeping high-speed steel drills the go-to option for many people.

“It has grown to become one of the most popular products we have ever launched, making it a legend of a drill with colleagues, distributors and end-users. The 20th anniversary of the A002 seems an ideal opportunity to celebrate this achievement.

“By widening the spiral groove and its unique self-centring split-point, the A002 became a gamer changer in drilling applications. Its design enabled light cutting and gave excellent chip evacuation, which made it versatile and incredibly easy to use. It saves times and offers consistent performance.

“When speaking with customers, who strive to use the lowest-cost drill for their applications, we highlight how this can be an expensive option in the long-term. When they consider a cheaper option will be less productive, difficult to use and potentially more dangerous, then the A002 is the perfect alternative. It is why when a customer has tried the A002, they often never use another drill again.”

To find out more about how the A002 can support your applications, please speak with your local Dormer Pramet sales representative or distributor. Alternatively, visit https://www.dormerpramet.com/en-gb/productssite/pages/20-years-of-a002.aspx

All Boom, No Bust with Cleveland Machine and ESPRIT

UNITED GRINDING Partners with TITANS of CNC for Manufacturing Education