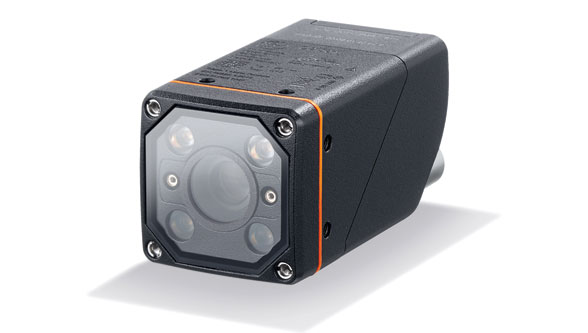 
The recognition of a one or two-dimensional code on a surface is absolutely necessary in many applications. With the new O2I50x-series multicode readers, ifm facilitates the integration and configuration in the application. Instead of a PC with configuration software, only one teach button and an app on the smartphone are necessary.

Modern multicode readers such as the devices of the O2I50x series from ifm must reliably recognise and evaluate different kinds of one or two-dimensional codes. Even under difficult light conditions, products must be identified via the code, no matter if the code is printed on a label, engraved in the surface or applied in any other way. With the integrated lighting (red or infrared) and different lenses, the multicode readers are suited for almost any industrial application.

In the past, the configuration of such code readers has always been very complex. The devices had to be connected to a PC on which all necessary settings such as focussing, illumination, selection of the image section, etc. had to be made by means of a configuration program. The integrated teach button of the new O2I50x series makes this process a lot easier: With the first time the button is pressed, two laser pointers are activated; the user can make the alignment so that the area with the code is between these two points. Then a code is placed in front of the multicode reader and the teach button is pressed again. Then the O2I50x sets all parameters as required and is ready for operation. To integrate the device into a controller and a network, ifm has developed an app for iOS and Android which can run on a smartphone. Here the user sets the required network addresses, fieldbus parameters or the trigger, for example. Then the app creates a data matrix code on the smartphone display which the user simply has to hold in front of the multicode reader. Then the configuration is completed. For complex identification tasks, the multicode reader can be configured in more detail using the Vision Assistant PC software. It includes an auto-find code function which automatically recognises several different codes in an image. Logic functions are also possible by means of which simple sequencing controls can be programmed in the multicode reader.

The multicode reader has many features. A storage device is, for example, directly integrated onto which the complete configuration is stored. If a device should need to be replaced, the storage device can simply be inserted in the new device which is immediately configured. Expensive downtimes are minimised. Furthermore, the internal storage device can be used to configure the same application on different devices. To communicate with the higher-level applications, the multicode reader has an Ethernet interface which does not only allow communication via TCP/IP but also via EtherNet/IP. Starting with the second semester, a Profinet interface will also be available.

The multicode reader has a stable and industrially compatible diecast housing and can be easily installed. As opposed to the predecessor models, the connection is now designed as a 5-pole M12 connector. The advantage is that the pin connection is standardised and that no individual wiring is necessary. Y cables are now available as accessories via which the voltage is supplied and an external trigger is connected. The new multicode readers of the O2I50x series are suited for all industrial applications in which codes have to be reliably recognised.