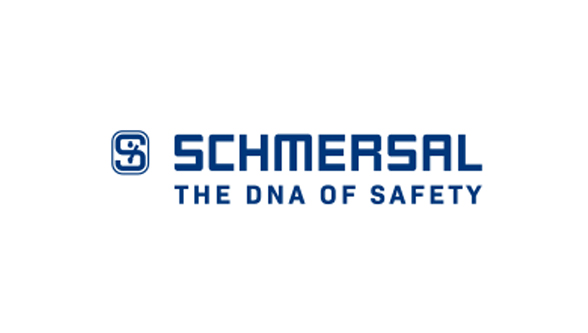 The young company K.A. Schmersal first started to produce switches and especially elevator switches in Wuppertal, Germany. And there was a market for that: after the war, the city of Wuppertal was 66% destroyed and Schmersal’s switchgear was needed for urgent repairs to elevators and in vital businesses such as hospitals. 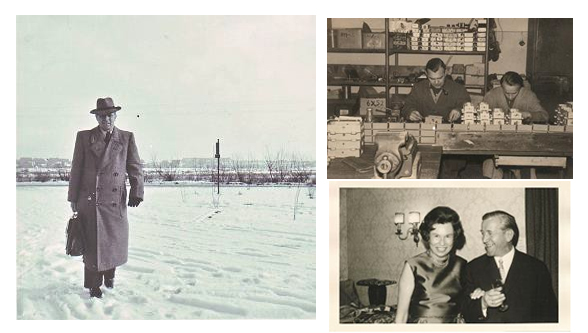 Left: Founder Ernst Schmersal with a sample case visiting a customer in the 1950s.
Right Top: Those were the days! You could still smoke a pipe at work.
Right Bottom: Ilse and Kurt Andreas Schmersal in the 1950s

But one of the first products that Schmersal manufactured shortly after it was founded in Wuppertal was – waffle irons. Because after the war the demand for household appliances was enormous. In addition, the waffle irons, hotplates and similar devices could be exchanged for food, heating material and later also for machines and materials for the construction of switches. Before the currency reform, such barter was the order of the day in the German economy.
Things soon picked up: at the beginning of the 1950s, Schmersal mainly produced switchgear for the flourishing construction industry.

Technology from Wuppertal – for the whole world

Many of the technologically advanced products that Schmersal markets worldwide today were developed in Wuppertal. To date, Schmersal has applied for patents for around 350 inventions. For example, Schmersal was already dealing with control technology at the beginning of the 1960s.

The age of globalization was ushered in at Schmersal in the 1970s: Schmersal founded a subsidiary in Brazil in 1974. Further production sites abroad followed, including in China (1999) and India (2013).

Schmersal products contribute to occupational safety the world over

Today the Schmersal Group is one of the international market leaders with the world’s largest range of switchgear. This way the company makes an important contribution to the protection and safety of people who work in the manufacturing industry – not only in Germany, but also in countries such as India and China.

Three generations of families have shaped the company in 75 years

Three generations have shaped the company in the 75 years of its existence. In the first generation, it was the brothers Kurt Andreas, Ernst and Aurel Schmersal who ran the company. In 1982, the founders retired from the management and transferred the entrepreneurial responsibility to their sons Stefan and Heinz Schmersal. With Philip Schmersal, the third generation of owners joined the management of the Schmersal Group in 2007.

Each generation has shaped the company in its own way. A consistent tradition, however, is the view that Schmersal, as a commercial enterprise, also has an awareness of social responsibility. A central corporate value of Schmersal is: ” We build an environment of solidarity and respect, contributing with personal commitment and financial effort to the sustainable development of society.” Schmersal takes this responsibility very seriously – we try to give something back to local society all over the world, e.g. by setting up school libraries in India or a training center for disadvantaged young people in Brazil.

Difficult conditions in the anniversary year

Forward-looking decisions were made 75 years ago. And even if the first years were hard and rocky for Schmersal – the first production batches were exchanged for food and heating material in 1945 – the young “start-up” developed into an unparalleled entrepreneurial success story.

The Schmersal Group is an international market and expertise leader in the challenging field of machine safety. With the world’s most comprehensive range of safety switchgear products, the Schmersal Group develops safety systems and solutions for special requirements in a variety of user industries. Schmersal’s tecnicum business division offers a comprehensive service portfolio to complement the range of solutions offered by Schmersal.

Founded in 1945, the company is represented by seven manufacturing sites on three continents with its own companies and sales partners in more than 60 countries. The Schmersal Group employs some 1,900 people worldwide and generated a group turnover of around €236 million in 2019.

Our aim is to be the most preferred source for oils & lubricants, Sunlube Group

Mastercam announces exhibit partnership with Haas and the APM

Tools for the railway industry as standard