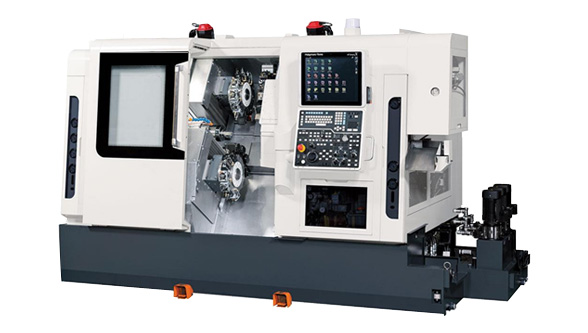 A multitasking process will see a milling cutter machining a rotating workpiece. The combination of milling and turning techniques has many advantages, but only recently have multitasking machine tools displayed its full benefits. Integrating multitasking with the manufacturing process can solve quality problems and substantially improve output as highly productive machining using this method is possible with modern machines and correctly chosen cutting tools.

Despite the fact that multitasking is similar to turning by a rotating mill, there is a substantial difference between these two machining processes and the cutting speed in multitasking is defined not by the rotary velocity of the workpiece like in turning but by the peripheral speed of the milling cutter.

However, the questions regarding multitasking application, tool choice, and cutting data deserve careful consideration and should be examined individually.

Nakamura-Tome NTY3-100 is a three-turret, 3-Y-axis multitasking machine centre, with an ergonomic 60-degree slant bed. Productivity is increased with simultaneous machining on the left- and right- hand spindles, as well as the Y axis on all three turrets. Photo courtesy of Elliott Matsuura.

It should be noted that indexable face milling cutters are good tools for multitasking. Moreover, productive machining with this method also demands proper cutter positioning regarding the workpiece, and the correct choice of insert geometry and tool path.

For instance, cutter positioning, influences form errors, and insert geometry influences surface finish. Generally, the final shape is produced by a wiper insert, which is mounted on the cutter.

It’s time to start looking into multitasking machines for shops that both turn and mill parts. The machines can perform these two operations in one footprint, eliminating the need to move the workpiece through the shop. Contemporary multitasking machines have a dynamic design and differ in operational capability depending on a shop’s needs. Additionally, the machine on the shop floor goes beyond simply combining turning and milling operations as it can transform a shop’s ability to effectively implement an integrated approach to production.

As there are many types of machines available on the market, shops may not see the value of a multitasking machine. Unfortunately, these machines tend to be much more expensive than their single-operation counterparts. That might be a negative point but shops should not undervalue the advantages of having one on the shop floor.

Moreover, a multitasking machines can substitute a minimum of two machines and generally takes up a smaller footprint compared to traditional single machines, and requires only one operator. It is imperative for shops that have multiple sequestered machining departments, where the milling machines are kept in one area and the turning machines in another.

A multitasking machine is designed for high-mix, small- to medium-volume runs. Generally, they are not recommended for high-volume production because multiple stand-alone machines can apply more spindles to the task. Types of parts being produced is another consideration. This machine scores basically in the production of highly complex components, particularly in the aerospace and energy industries. Multitasking machines are also suited for production of small parts like those found in medical parts manufacturing. It is, however, not recommended for extremely heavy parts that require more rigid turning and minimal milling.

Incidentally, a significant benefit of multitasking is the increased part accuracy. The data points on the part features don’t change because both operations (milling and turning) are done in a single setup, which eliminates any problems with stacked tolerances. This is compared to workpieces having to move between four or five different machines where accuracy is at the hands of the operator when it comes to loading and gauging the part correctly multiple times to get all the part features just right.

Multitasking machines, over the years, have grown to include hundreds of different models and multiple configurations to meet any shop’s production needs. From simple two-axis machines to highly robust hybrid additive/subtractive multitasking machines, there is something for everyone.

More the number of tools fitted in the machine, less the setup time will be needed to go from part to part. However, the more tools the better as the first thing some customers say is that they don’t have that kind of volume. But you really don’t need it because not all turrets will be running at the same time. However, what this does is give the shop more flexibility and minimises cycle time, allowing them to take on more projects.

As discussed earlier, one of the biggest factors is cost. However, the value of these machines is a shop gets all the features they need to expand in the future. It’s not just about what is needed right now, and if a shop isn’t willing to invest in the features and accessories that maximise the machine’s effectiveness, then it may not be worth looking into a machine like this. Assessing the budget, a shop can customise the multitasking machine to fit its specific needs.

When purchasing a multitasking machine, one has to consider the graphical user interface and how easy it is to use. And if the machine asks very direct and simple questions to allow you to get into production faster, that’s a huge advantage. Additionally, you will also want to ensure, especially if this is a first-time buy, that the machine builder offers strong support to help you with any challenges that may arise and can help to maximise the machine on the shop floor.

Multitasking machines have become much more ergonomic over the years. Earlier configurations made it somewhat challenging for the operator to interact with the machine. But now we are seeing many of the latest machines have moved the spindle closer to the front of the machine, making it easier for the operator to work. Practically, every component that requires human interaction is brought forward to increase accessibility.