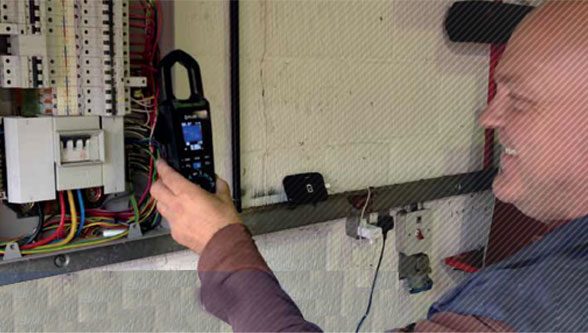 The thermal images provided by the FLIR C2 thermal camera and the FLIR CM174 imaging clamp meter visually guide electricians to the precise location of a potential problem.

When self-employed electrician Gary Fisher was given the opportunity to ‘road test’ a FLIR C2 thermal imaging camera and CM174 clamp meter, he saw it as a chance to see exactly how much value these advanced devices could add to his work.

In electrical installations, successful diagnosis of problems before they become a genuine danger is a real advantage. Among the devices best able to help facilitate this is a thermal imaging camera. Its speed and ease-of-use make it a must-have gadget for the electrical trade. At least that’s the theory, but what about in practice? 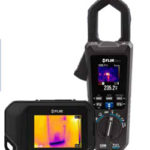 The thermal images provided by the FLIR C2 thermal camera and the FLIR CM174 imaging clamp meter visually guide electricians to the precise location of a potential problem.

Gary Fisher carries out a wide range of electrical work, typically involving distribution boards, covering an area between his base in Milton Keynes, down the M1 corridor as far south as Harrow in northwest London. His father, now retired, started the business originally, which Gary joined after finishing school.

Identify heat spots in circuits
“There’s no doubt that thermal imaging is coming more and more into what we do,” he says. “Even before I tried the camera I knew it would be able to identify heat spots that would show up circuits using a lot more energy than elsewhere in the system. I couldn’t wait to put the FLIR C2 through its paces.”

The first thing that Mr Fisher noted was the size of the C2 (125 × 80 × 24mm), which he says “could easily be mistaken for a mobile phone”. Compact and light (130g), the device fits comfortably within an electrician’s top pocket.

“Its ease-of-use was also striking,” he says. “I have never used a thermal camera before but it really is point and shoot. The image can be viewed through the 3” touchscreen, which displays amazing picture quality.”

“It’s easy to see objects and heat areas extremely clearly and with plenty of detail, which helps quickly identify the areas that need attention,” says Mr Fisher. “It’s the sort of device that can benefit electricians of all levels, from serious professionals who maintain high voltage installations in the industrial and heavy commercial sectors, through to domestic tradesmen. From my point of view, the opportunity to present the customer with a binder complete with thermal images that record and report findings is a mark of quality, and would definitely give me a competitive edge.”

The C2 can store radiometric JPEGs at the push of a button. Furthermore, the images can be downloaded later using the free FLIR Tools software, which allows the user to adjust thermal image levels, isolate and add temperature measurements, change colour palettes and create persuasive reports.

Prevent danger, save lives.
However, aside from the C2’s innovative features, it is the device’s pure ability to avoid dangerous situations and, potentially, save lives that proves the main attraction. One of principal reasons that consumer units are made from metal is because of the fires that can occur due to loose connections building up heat points.

“The FLIR C2 is just the thing to prevent this,” states Mr Fisher. “When performing an estimate you can simply point it at the client’s consumer unit and provide clear proof that there is a possible danger that needs to be addressed.”
Visualize electrical issues Sufficiently impressed with the FLIR C2, Mr Fisher also had the opportunity to test the FLIR CM174 600AC/DC clamp meter.

“When I’m undertaking a job I find it’s important to know what current is being consumed as it helps with my decision making,” he says. “If there is any humming noise or any uncertainty surrounding a circuit, I can get the CM174 on the job and see immediately what’s going on.”

With the FLIR CM174 clamp meter, which features IGM (Infrared Guided Measurement), users can identify dangerous and unknown problem areas quickly and safely. In short, electrical issues can be visually identified without requiring direct contact with panels, cabinets or cluttered wires and cables that may present safety hazards.

“In essence the CM174 is a clamp meter combined with a thermal imager, which makes it a really neat device,” says
Mr Fisher. “If I owned this I know I would use it regularly.”

Further features of the FLIR CM174 admired by Mr Fisher include the narrow clamp jaws, which help getting in between all the cables inside consumer units. He also says that it is of sufficiently robust design to keep inside his toolbox with the rest of his kit. “What more could an electrician want?” 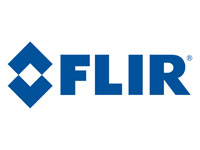