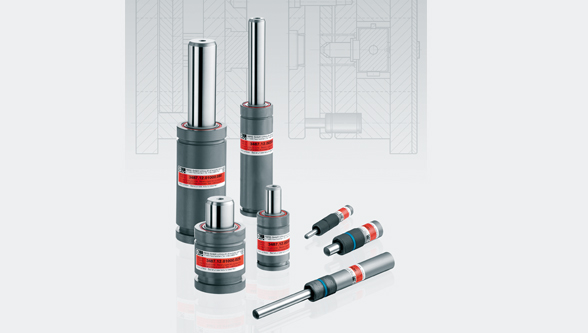 If additional movements are needed in a mould, designers often rely on mcam pins, compression springs or latch locks. Now there is an alternative from FIBRO: Mould Line, the gas spring for mould making.

Gas springs are always the right choice whenever, for instance, another intermediate plate or a slidem,unit is to be moved parallel to the mould opening at the parting line. Benefits include, above all, pressure monitoring and simple force control.

An additional aspect is the overload protection. Should a component, which is to be moved, be jammed – for example, a stripper or an intermediate plate in a 3-plate tool – latch locks can often pull until a component breaks.Not so with the FML Mould Line gas springs from the standard parts manufacturer FIBRO GmbH, Hassmersheim:Once it reaches the set force, it remains in position. Better yet: it can be used to diagnose a pending failure and replacement can be planned without having to interrupt production.

A replacement can be installed whenever a break in production occurs.Used in conjunction with standardised elements for mould making, gas springs provide basically the same functions as a latch lock. They are placed, for example, behind the intermediate plate to be moved so that this plate is shifted by a certain distance during opening.

Mould Line gas springs are characterised by their high force, their small size, a long service life of at least 1,000,000 strokes and a continuous operating operating temperature of 120°C. They are approved as per the European Pressure Equipment Directive 97/23/EG (14th GSGV ordinance on pressure vessels). In addition to technical advantages, there are also practical cost benefits: Various mounting possibilities ensure simple installation and the elimination of the lateral machining for the fastening of latch locks on the mould. This saves about two-thirds of the costs, according to the manufacturer.

• Minimal adjustment required
• No lubrication required
• No maintenance required for up to500,000 strokes
• Variably adjustable forces
• Mould temperatures up to 120° C
• Approved as per the European Pressure Equipment Directive 97/23/EG
• A pressure monitoring system makes it possible to recognise an impending failure at an early point(prevention)
• No tool breakage, should the 2nd parting line lock (the plate comes to a standstill; after the removal of the jam, production can be resumed)
• In all Cost savings of 60 -70 % versus a latch lock

Additional information on Mould Line gas springs as well as technical data and mounting examples can be found in the new FIBRO Standard Parts catalogue for mould making.